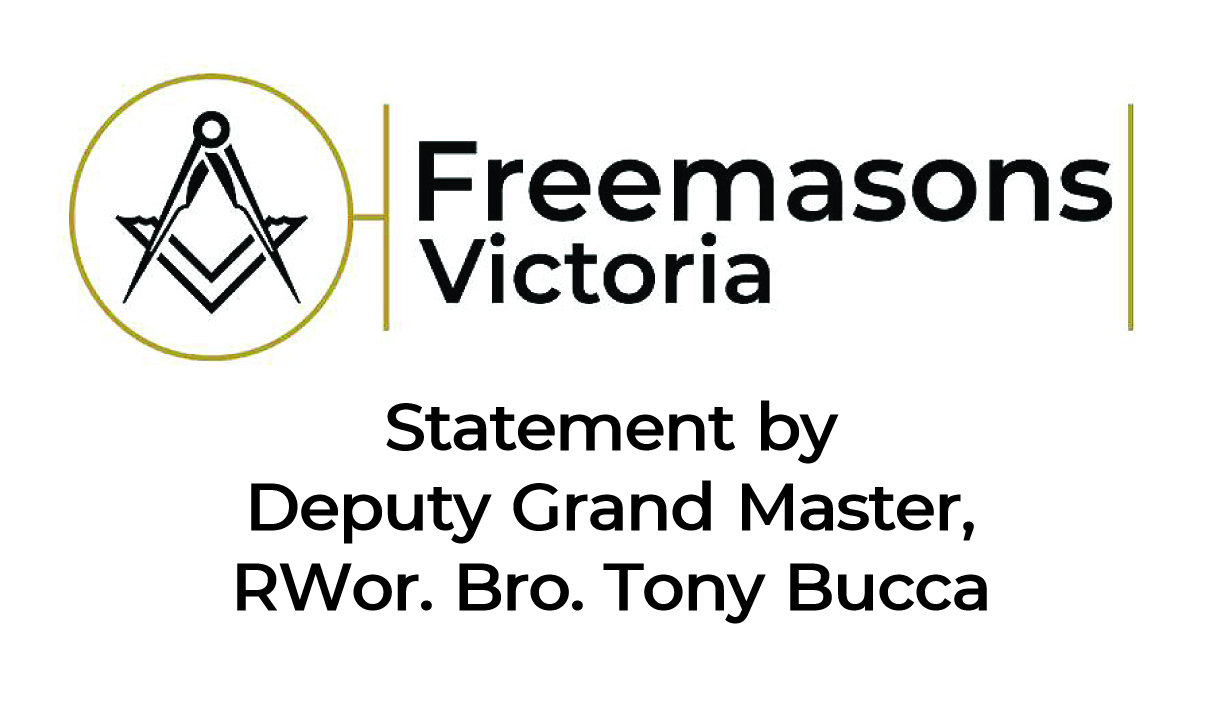 Hello my name is Tony Bucca.

As the Deputy Grand Master of Freemasons Victoria, I want to put on public record, appreciation to the large number of Brethren who have been in contact in support of the first of a series of changes announced by our Grand Master last week. The positive response has been overwhelming. Thank you.

These changes have been in the making for some times. Our aim has been to remove red tape and unnecessary administrative and prescriptive impediments.

Richard Elkington and I have long been advocates of allowing autonomy to Lodges, with independence to shape their own destiny. Importantly, this is all done within the context of maintaining uniformity of practices, and adhering to our landmarks, and our obligations as Freemasons.

I want you to know that Richard and I have beeninvolved in the preparation of the Freemasons Victoria since I was elected as Deputy Grand Master in 2019.. Change has been on the agenda for some time, long before the current chapter of Change Management Forums.

Shortly after the Grand Installation last year, I was asked to make a presentation by Zoom at the Earl of Dunmore Lodge.. The discussion was titled ‘How Do We Create A Better Lodge Experience?’

The Moderator was MWor. Bro. Paul Holland, Grand Master of the United Grand Lodge of Queensland, who recorded the session and uploaded it to his personal Youtube channel. For those who are interested, the link is on screen.

Since our Grand Master’s announcement last Thursday, there have been several comments that suggested Bro. Elkington’s initiatives were a ‘knee-jerk reaction’ and that we were ‘appeasing vocal minorities’.

They have been nothing of the sort. These changes were not a spur of the moment thing. They were not announced to pander to those who think they have all the answers. Almost all of the changes announced were spoken of in July last year, and in many cases, long before.

It is on the record that there have been many discussions involving Richard and myself about change within Freemasons Victoria. I have presented my talk to a number of lodges by invitation. Our theme has been consistent. Meaningful change will help move our Craft into the remainder of the 21st Century.

Some would have us believe that we can rush change through. Some things take time and require detailed and well thought out consideration. We must, of course, accommodate the approximate 20 per cent of our membership who have no internet or email. In many instances, it is that older group which has seen Freemasonry through until today.

We could have continued on as we were. The Grand Master and I are totally supportive of change, and we have encouraged input and discussion by all. There will no doubt be more announcements following detailed examinations, workshops, and recommendations by the independent committee in due course. Even I, as Deputy Grand Master, do not know who will comprise that Committee. The GM and I play no part in what is an independent Committee or their recommendations and deliberations. Nor do we have any input into the forums – which are for the members to have their say.

We need to ensure that the views of as many members as possible are put forward. Everyone needs to have the opportunity to comment and have their say. Not just the 200 who have attended forums or those who post on Facebook.

Thank you to all those who are giving so positively to courteous discussion on the direction of our great fraternity in Victoria.